I joined a few friends yesterday on the Bruce for an annual Puttyroot (Aplectrum hyemale) survey.  We were pleased with 47 of the small pin-striped leaves, an increase over last year (perhaps just the luck of a few more not being covered in leaves).  On the drive up we got to wondering a bit more about the nomenclature; as it turns out, Aplectrum comes from "a" - without and "plectron" - spur, referring to the lack of a spur on the flower.  "hyemale" - winter in reference to the persistent leaves.  Anyways, a grey and snowy day (Wiarton was on pace to receive 10-15cm) didn't yield any photos.

According to the NHIC species list, there are 248 species belonging to the Carex genus - the sedges, in (or once known from) Ontario.  Looking further into the data:
I enjoy playing with the microscope camera in our lab at work and took a bunch of shots this summer.  The first 2 photos here are Porcupine Sedge (Carex hystricina) and for comparison, 3 and 4 are Sallow Sedge (Carex lurida). 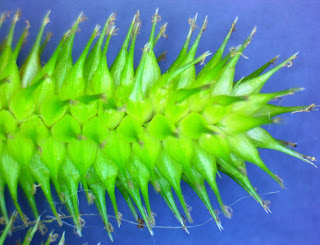 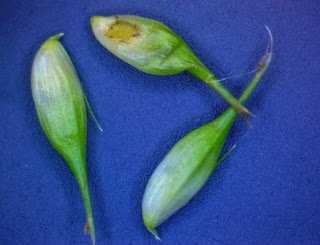 Porcupine Sedge tends to have more veins on the perigynia (the individual, fleshy seed capsule), 15-20 versus the 7-12 of Sallow Sedge.  The latter also has plumper or wider perigynia. 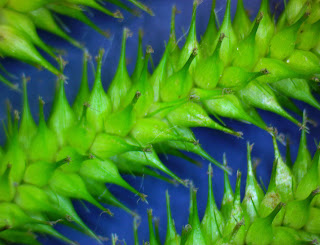 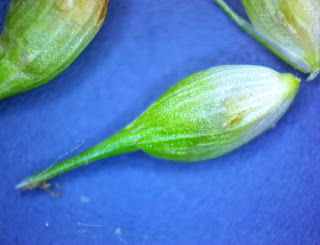 Another pair of sedges that are somewhat similar, photos 1 and 2 are Brome-like Sedge (Carex bromoides) while 3 and 4 are Dewey's Sedge (Carex deweyana). 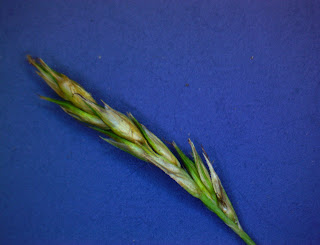 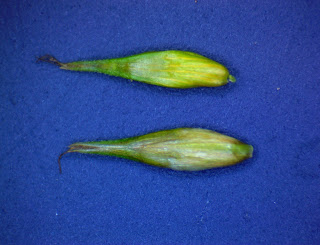 Michigan Flora notes that Dewey's Sedge tends to be more robust with wider perigynia.  Brome-like has visible nerves (veins) on the ventral face of the perigynia.  Generally speaking, Dewey's is found upland and Brome-like in swamps. 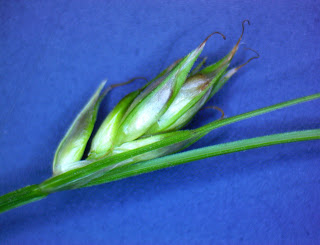 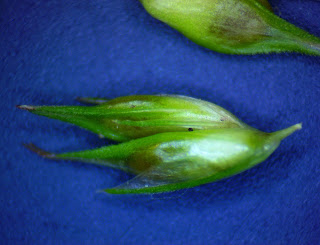 A few more random shots, the next two are Inland Sedge (Carex interior).  An important consideration in sedge ID is the arrangement of male and female flowers, The spiky portion at the tip of Inland Sedge is the female (pistillate) part with the narrow beige portion below being the male (staminate) part. 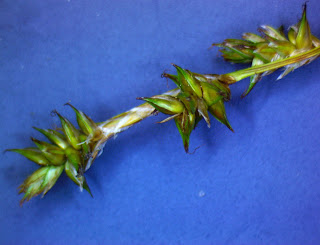 The perigynia each contain an achene or 'nut' inside the broad 'pouch'.  A style leads from the achene (inside the beak, the tapering portion), to the stigma, the spindly hairs poking out of the top.  If there are 2 stigmas, the achene is flat or lenticular, 3 stigmas and it is three-sided or trigonous.  All of this to say hand lenses and microscopes come in handy. 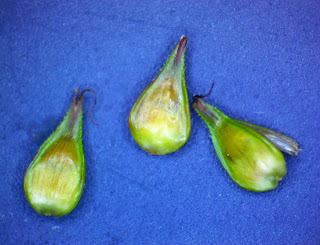 Scale shape, length and colour are also important.  The whitish scales below are those of Loose-flowered Sedge (Carex laxiflora).  Along with the Ovales section, the Laxiflorae can bee some of the more difficult sedges to ID. 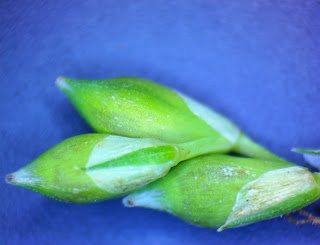 A few Ontario sedges resemble a medieval mace, ok, scratch that, almost all of them do, but some more than others.  The 2 photos below are Smooth-sheathed Sedge (Carex laevivaginata).  It tends to grow in riparian areas and is most easily identified by the long perigynia beaks and leaf sheaths. 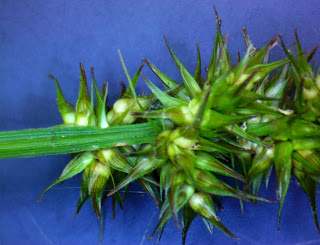 The firm, thickened leaf sheath differentiates this species from Awl-fruited Sedge (Carex stipata) which has a more loose, papery sheath. 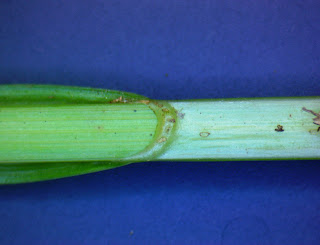 I thought I would throw in a few grasses for good measure.  The first two are the spikelets of Deer-tongue Panic Grass (Dichanthelium clandestinum).  Alot of species in this genus require fruits, a hand lens and a ruler for identification but once you're into the keys it's not too difficult to narrow things down.  This rare species can grow over a meter tall and has very broad (think bamboo) leaves, but many of the other panic grasses are shin height and somewhat the same upon first glance. 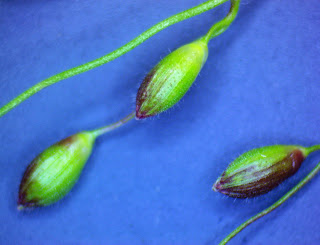 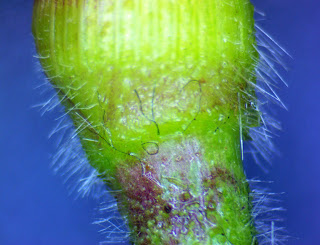 Finally, Grove Meadow Grass (Poa alsodes).  I was happy to find this as part of an inventory I did near Cambridge this year; not considered rare in in Waterloo Region but not overly common either. 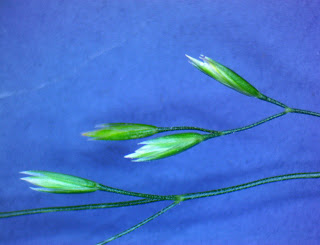