Arriving in Waynesville, NC, Alyssa and I enjoyed a nice dinner at a Thai restaurant before getting back to the cottage to plot out some plans for the next day.

We settled on the exploring a few trails in the Cataloochee Valley which is located in the southern part of the Great Smoky Mountains National Park.  As it turned out, the valley seemed to be rather dry and kind of limited in the wildflower department.

Sassafras (Sassafras albidum) was blooming at a high elevation and we saw our first Eastern Towhee of the trip rustling around in the brush surrounding the lookout. 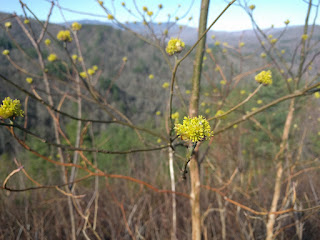 Dashing across a creek after a white butterfly I was happy to locate my first West Virginia White for the trip.  I'm hoping to go out to a couple of spots in Cambridge this weekend to look for this species which feeds on Toothworts (Cardamine spp.). 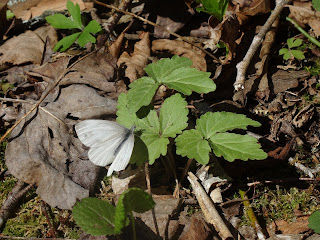 As the group discussed lunch timing this brown butterfly caught my eye.  After searching my resources later that night I had landed on Brown Elfin. Cool! 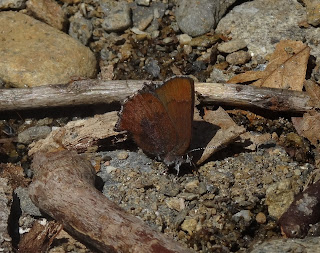 A highlight for the day for sure was getting good looks at a dozen or so Elk.  I later learned that this population was re-introduced in 2001 when 25 animals were brought in from Land Between the Lakes National Recreation Area in western Kentucky. 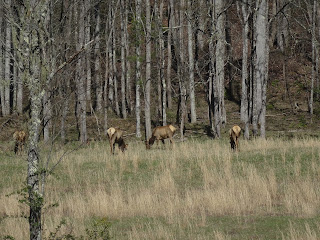 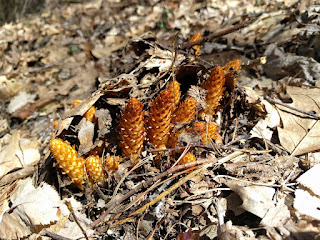 The following day we travlled to the north end of the park to hike the Schoolhouse Gap Trail.  This location doesn't disappoint with stunning displays of blue and white wildflowers.  There had been some significant damage caused by Wild Boar recently and park staff had set up cage traps.  Here's hoping they can effectively manage them.  I met a guy from Alabama in the Smokies in 2015 who when asked about the boars simply said "Oh you don't want to mess with them, they're assholes!"

The cream-yellow coloured flowers of Sessile Bellwort (Uvularia sessilifolia), one of my favourites. 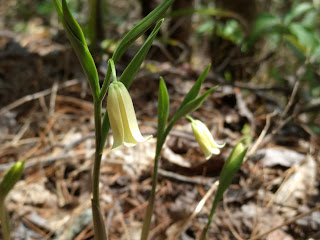 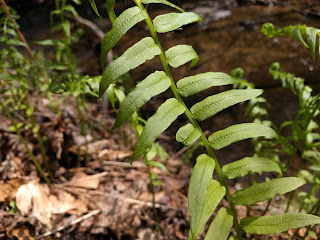 The fruits of Buffalonut (Pyrularia pubera), below, resemble Pokeweed (Phytolacca americana) which is also found in the park. 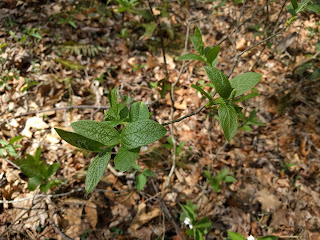 I never did ID this skink...(there are 5 species in the park).  These guys are quick!!! 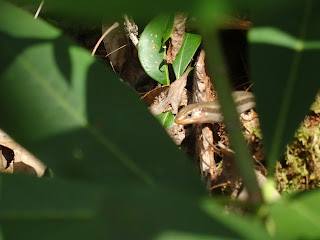 Andrew and myself were giddy when we arrived for a guided hike only to see that it was being led by one of the awesome trip leaders we had back in 2015.  Gabes Mountain Trail led us to a waterfall for lunch and further up in elevation to get some great views of the surrounding valleys and ridges.

Oh and there were more cool plants too...

After staying the night in Paducah, Kentucky we set out early back over the Ohio River and to the Heron Pond Preserve near Belknap, Illinois.  This spot is known as an area where many northern species meet their southern extent and vice-versa.  I was told to check this spot out for a variety of herpetofauna, but as with Snake Road the day prior...it's all good...plants, birds, you name it.

A few Red-headed Woodpeckers darted throughout the treetops during our hike of about 5 hours. 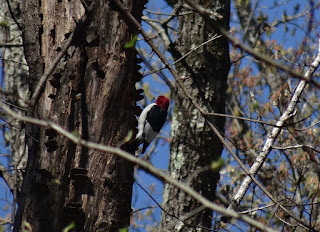 Heron Pond is known for having one of the most northerly Bald Cypress (Taxodium distichum) swamps.  Here an unidentified snake suns itself in a root referred to as a 'knee'. 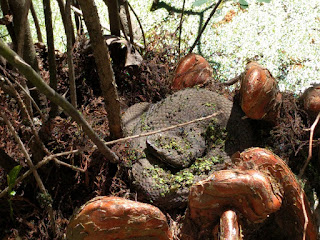 The banks of the watercourse were prime basking habitat for turtles including these Spiny Softshells; there were 8 in the original un-cropped photo. 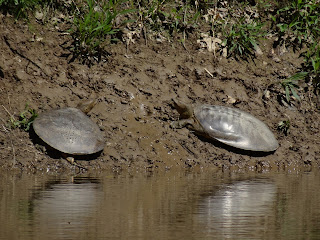 Marbled Salamander was a target species and a lifer for the trip.  This adult was about 10cm in length and covered in Sycamore seeds. 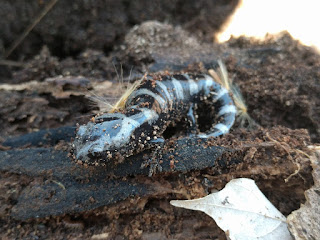 Exploring an area of rail line ditch I stumbled across this fresh clump of Green Dragon, an uncommon relative of Jack-in-the-pulpit (uncommon in Ontario that is).. 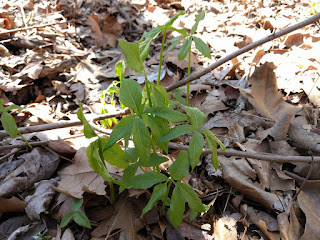 A sign of the Trillium diversity to come once we reached the Smoky Mountains, this is Prairie Trillium (Trillium recurvatum), or, as it's also known 'Bloody Butcher'...yikes. 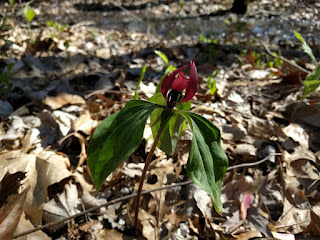 As best I can tell, this is Southern Adder's Tongue (Ophioglossum vulgatum), an interesting fern species I found growing alongside Green Dragon at the edge of a swamp. 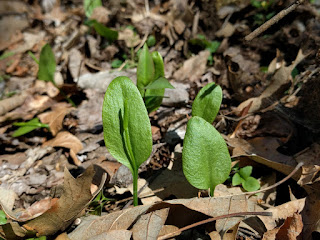 The foliage of Bald Cypress beginning to emerge. 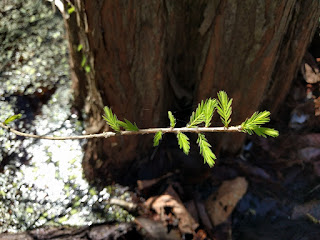 And then there was the State Champion Cherrybark Oak (Quercus pagoda)... 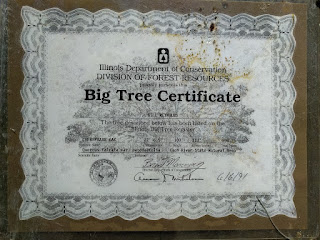 What a beast!  This tree is a well-known attraction at the preserve and seemed to be in pretty good shape.  Here's hoping it can add to those impressive stats.  It's not an 'open grown canopy' by any means but a 35m crown spread and a diameter at breast height well over 2m make this one the biggest of it's species in the state of Illinois.

Like nothing I've ever seen before, the Bald Cypress swamp from the boardwalk.  The knee roots pop up through an endless carpet of Lesser Duckweed.  It was really neat to see this habitat having come across isolated Bald Cypress trees in Indiana Dunes State Park last year.

The next day we were off to Nashville for 2 nights were we enjoyed a bluegrass show at the Station Inn.  After that we made our way east to Waynesville, North Carolina and the Great Smoky Mountains which will be highlighted in my next post.
Posted by Patrick at 10:30 PM 4 comments:

Leaving Kansas City we made our way east toward St. Louis then drive south along the Mississippi toward Snake Road in Shawnee National Forest.  We arrived late morning and the first thing that struck me was the lack of herper-types there...we had the place to ourselves.  This turned out to not be ideal as 2 sets of eyes spotting snakes is not nearly as effective as the perhaps 15 sets of eyes I had imagined.

Ken Burrell had mentioned I should listen for Louisiana Waterthrush, and moments after stepping out of the vehicle...

This Red-bellied Snake was the first snake we spotted, no Timber Rattlesnake, but hey. 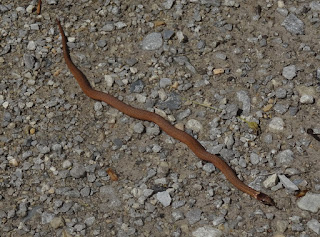 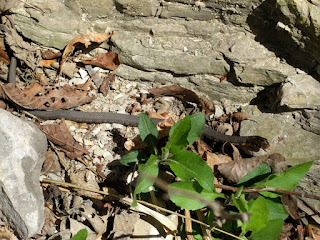 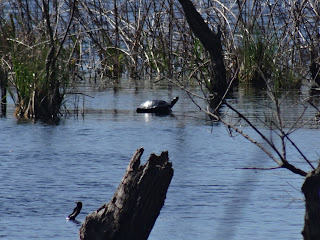 Cave Salamader was a new one for me, these little guys can be found in the crevices of damp caves.  They tended to be a little camera shy, receding back into the cracks when spotted. 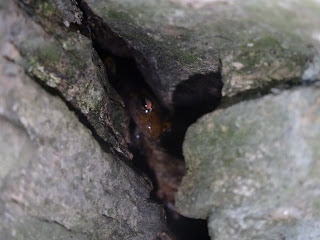 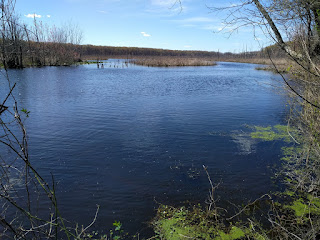 The odonates, including this Common Baskettail were out in modest numbers. 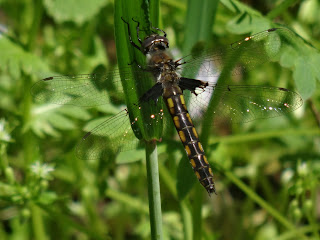 I bounded down the road after this Zebra Swallowtail, a lifer and a nice looking butterfly. 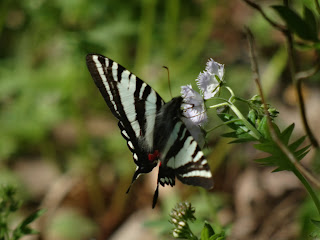 It seemed like Fringed Phacelia (Phacelia fimbriata), the white flowers in this photo, was the plant getting all the pollinator attention that day. 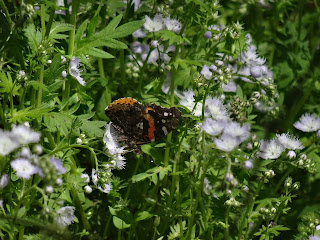 Try as I might to find Harbinger-of-spring (Erigenia bulbosa) in bloom, I could only spot a few vegetative plants.  The spiky brown fruit in this photo belongs to American Sweetgum (Liquidambar styraciflua), imagine stepping on one of those in your lawn! 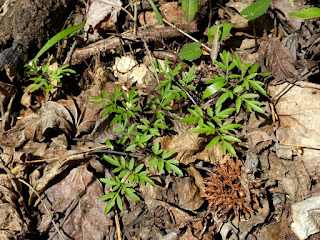 It became clear to me within 5 minutes of arriving that although being at a spot known for snakes, I was going to spend a lot of time looking at the plant life.  This picture shows a nice rocky embankment of Virginia Bluebells (Mertensia virginica) and Wood Poppy (Stylophorum diphyllum)...not too shabby! 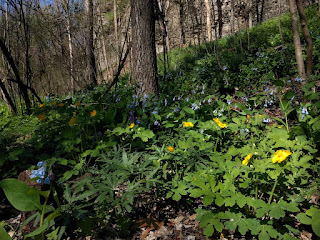 I think the highlight of the day for me was spotting this budding flower which I recognized as Wild Hyacinth (Camassia scilloides) from my time spent on Pelee Island each May. 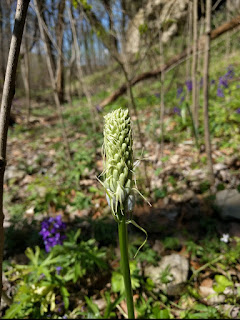 The plants on Pelee Island in May are typically clumps of basal leaves just beginning to send up a flowering stem.  I had never seen this species in flower before, so I was pretty excited to look up a slope and find a couple hundred of these! 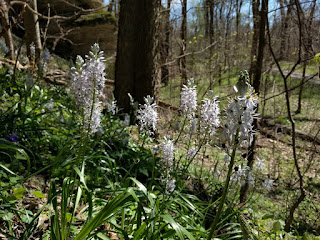